The Installation ‘Q-Water’, references the Russian outlawing of ‘homosexual propaganda’. The ambiguous wording (as with the British ‘Clause 28’) of the Russian law implies that sexuality is a lifestyle choice, which may be marketed and advertised as a product.

Such kind of ‘product’ may ‘turn’ the consumer onto this lifestyle choice thus infiltrating all sectors of society enabling further queer marketing through everyday consumerism, entertainment and finally necessities. The rationale given for the law against gay propaganda was the ease with which homosexuality could be indoctrinated. For example a multinational drinks company were sued by the government and religious activist for having a rainbow as a part of the pastural scene depicted on their milk carton’s packaging.

Seeking a way to avoid censorship in his home country and being inspired by the innocuous imagery being outlawed (rainbows, non-sexual body images or anything the government could cite as propaganda), as well as criticizing the exploitation of the ‘Pink-Euro/Pound’ – the idea that gay liberation may be achieved through capitalism, the artist Nikita Zhukovsky created a work devoid of anything that could be seen as sexual, explicit or, viewed by the government as provocative. The artist made the piece accessible to all and not restricted to LGBTQ or queer-aware audiences. Therefore his decision was to use humour as the common denominator. This was to provoke the spectator’s own journey of thought into the absurdity of the notion that any kind of gay propaganda/product could actually succeed in ‘turning’ the consumer ‘Queer’.

‘Q-Water’ is an ironic commentary on a so called ‘gay-propaganda law’. It is a fictional energy drink that just like alcohol may only be consumed by an over 18 audience. The inherent properties of this unique and completely ineffectual product are reputed to enhance the consumers exploration of their sexuality, after only one bottle.

This September during the Berlin Art Week ‘Q-Water’ is launching a brand new advertising campaign and 92 copies of queer energy drink will be available on request at the counter of a queer bar in Neukölln for a voluntary donation.

Artist and queer activist Nikita Zhukovskiy was born in 1982 in Moscow, Russia. He works with various media including video and sound, silk printing and action painting, objects and interactive technologies, new media and installation.

He published an essay on queer theory on 2013 before leaving his home country and continues contextual and cultural research in exile. He now lives and works in Berlin and studies Digital Arts at the Universität für Angewandte Kunst, Vienna.
He has previously studied creative writing and fiction translation at the University of Literature and Journalism in Moscow; Fine Arts at the Studio of Ilya and Emilia Kabakov, ICA Moscow and British Higher School of Arts and Design of the University of Hertfordshire. His work was featured in the collective shows at the Museum of Modern Art of Moscow, CDA Moscow, Random Gallery, Tretyakov Gallery Moscow, White House Vienna. 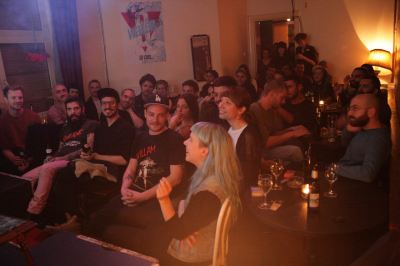 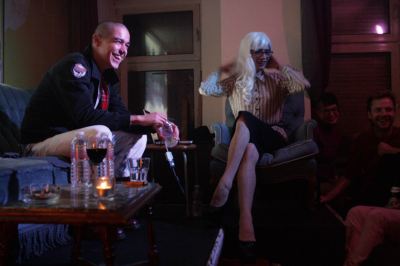